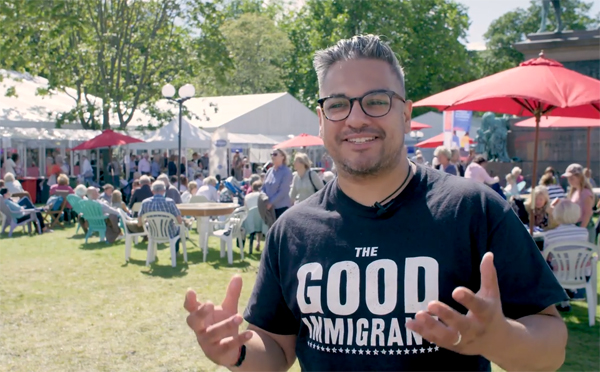 This resource is great for:
Kick starting classroom discussions about race.

Summary:
Watch a filmed interview with author Nikesh Shukla and hear about his anthology, The Good Immigrant. Then use the discussion points to explore themes of race in publication and literature, as well as in society as a whole.

Introduction
Nikesh Shukla is an author and youth worker who also edits magazines and books. He is the editor of The Good Immigrant, an anthology bringing together the stories of 21 emerging British BAME (Black, Asian and Minority Ethnic) authors. During the 2017 Edinburgh International Book Festival, our young reporters Beth and Sheena got the chance to speak to Nikesh. Watch the interview below – then read on for our activities inspired by Nikesh’s book and thoughts.

Nikesh talks about the lack of diversity in British publishing:

List the books you’ve read in the last few months – you could expand this to articles, short stories etc. How many of those books are by BAME authors? What issues do you think there are if few BAME authors are being published? How many are by authors from other minority groups such as the LGBT community or people with disabilities?

What do you think are the problems with this ‘single story’ being told (especially if these stories are being told by heterosexual white men)? Do you think there might be a societal impact if the work of these communities is not being published?

Nikesh brings up the issue of empathy. Books are an important way that we can put ourselves in someone else’s shoes, to see from their point of view. Thinking about this, what issues might then arise from a lack of diversity in publishing?

You guys know about vampires? … You know, vampires have no reflections in a mirror? There’s this idea that monsters don’t have reflections in a mirror. And what I’ve always thought isn’t that monsters don’t have reflections in a mirror. It’s that if you want to make a human being into a monster, deny them, at the cultural level, any reflection of themselves. And growing up, I felt like a monster in some ways. I didn’t see myself reflected at all. I was like, “Yo, is something wrong with me? That the whole society seems to think that people like me don’t exist?” And part of what inspired me, was this deep desire that before I died, I would make a couple of mirrors. That I would make some mirrors so that kids like me might see themselves reflected back and might not feel so monstrous for it.

How do you think you would feel if there were no characters who reflected you in the books you read? Or, potentially, if you only saw negative representations of your race or culture?

Talk about if and why you think it’s important that we hear more diverse voices in literature (and perhaps in other areas – film, art, television etc).

We need your stories.

Have Nikesh’s words inspired you to tell your own story? Remember that your point of view is completely individual – only you can tell it! Why not write your own piece of writing about your family, your background or your life? It doesn’t need to be complicated or long – just use your own voice, it’s the only one you have.

Nikesh mentions Rife Magazine, the magazine by and for young people which he edits. Take a look at some of the content on their website. Why not pitch something to them?

Young reporters Beth and Sheena are part of What’s Your Story?, Scottish Book Trust’s development programme for teenage writers and illustrators. Find out more at www.thestoryis.co.uk